So, I'm looking through old posts for a recipe and see a sprinkling of unfinished posts. In case anyone cares, anyone?, no, ok well I'm still going to publish these unfinished musings on recipes I've made in the last two years. :)
http://www.gimmesomeoven.com/pesto-pasta-with-chicken-sausage-roasted-brussels-sprouts/
1 lb fresh brussels sprouts, ends trimmed and any yellowed/browned outer leaves removed, then sliced in half
3 Tbsp. olive oil, divided
1/2 tsp. Kosher salt
1/2 tsp. freshly-ground black pepper
1 lb (16 oz.) orecchiette (or any pasta)
4 chicken sausage links (I used spicy Italian), sliced into 1/4" thick coins
5 cloves garlic, peeled and thinly sliced
1/3 cup pesto
Parmesan cheese, for serving
Preheat oven to 400 degrees F. In a large bowl, mix together brussels sprouts, 2 Tbsp. olive oil, salt and pepper. Gently stir until well-combined.
Prepare a baking sheet with aluminum foil, then spread the brussels sprouts on it evenly. Roast for about 20-30 minutes, stirring once partway through, or until they are crispy on the outside and cooked on the inside. (My batch of tiny sprouts only took about 12 minutes to cook.) Remove from oven and set aside.
Meanwhile, heat the remaining olive oil in a skillet over medium-high heat. Add the sausage and cook, turning occasionally, until nearly-browned, about 6-8 minutes. Add the garlic, and continue cooking for another 1-2 minutes until the garlic is fragrant and the sausage is browned.
Cook the pasta according to the package directions. (I begin heating my water while preparing the brussel sprouts, and added the pasta to the boiling water just after beginning to cook the sausage.) Once the pasta is cooked, drain the water (reserving 1/4 cup pasta water), and then toss together the pasta, pesto, cooked sausage and garlic, and brussels sprouts. Add in some of the reserved pasta water if needed for extra moisture.
Serve warm, and sprinkle with freshly-grated Parmesan cheese. 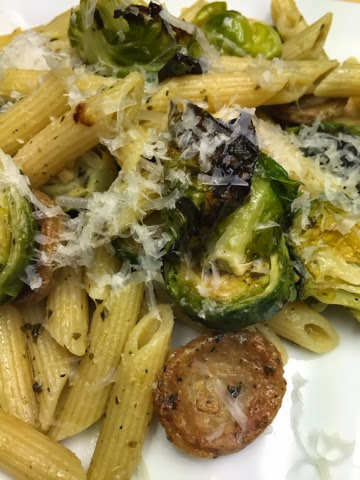 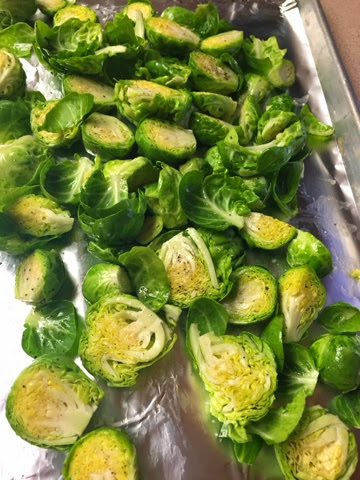 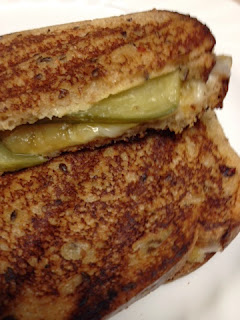 I like this sandwich. Heck I loved it. Is is an OMG? No, but it is a very tasty way to have an easy dinner.  The inside out grilled cheese is a better way to cook the sandwich, (and a better sandwich too) but the fillings were good.


In a deep skillet, melt 1 tablespoon of the butter in the oil. Add the onion, cover and cook over high heat, stirring once or twice, until softened, about 5 minutes. Uncover and cook over moderate heat, stirring occasionally, until the onion is very tender and caramelized, about 25 minutes longer. Add water to the skillet as necessary, 1/4 cup at a time, to prevent the onion from scorching. Season the caramelized onion with salt and pepper.

Spread the bread with the remaining 2 tablespoons of butter and arrange, buttered side down, on a work surface. Spread a thin layer of mustard on each slice. Top half of the slices with the onion, Gruyère and pickles and close the sandwiches.
Preheat a skillet or panini press. Grill the sandwiches over low heat until the bread is toasted and the cheese is melted, 10 minutes. If using a skillet, press the sandwiches with a spatula and flip them halfway through. Cut in half and serve right away. 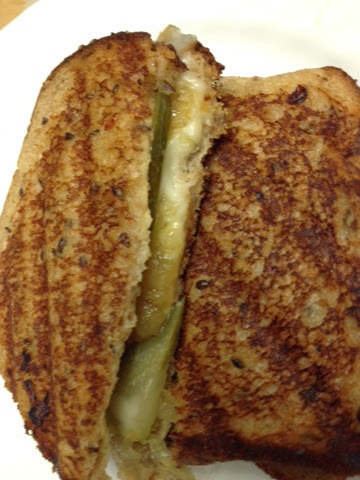 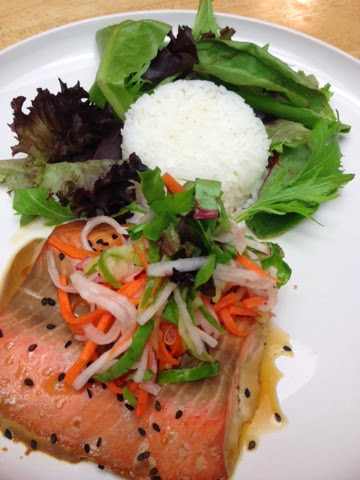 While not bad, we aren't keeping this. I still am posting it for posterity.

For the salmon, mix the soy sauce, sugar, mirin, and sherry and stir to dissolve the sugar. Put the fish in the marinade, turn to coat, cover, and put in the refrigerator to marinate for 30 minutes.

To make the vegetables, heat the vinegar and stir in the sugar until it dissolves. Set aside to cool. (Or, if you are in a hurry, you can just whisk together the vinegar and sugar in a bowl until the sugar has dissolved.) Keeping them separate, cut the cucumber, carrots, radishes, and mooli into matchsticks, each about 2 inches long. Sprinkle the salt on the cucumber and put it into a colander for 10 minutes, Rinse and pat dry, then add all the vegetables to the vinegar mixture and toss to combine.

When you're ready to cook the fish, preheat the oven to 350°F. Bake the salmon, in its marinade, for 12 minutes; it will remain moist and only just cooked in the middle. Sprinkle with the black sesame seeds. Add the pickled ginger and microgreens to the vegetables, toss, and serve with the salmon. Offer rice on the side. 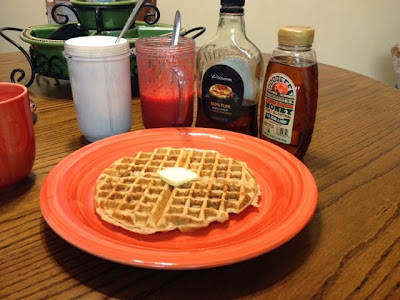 School is out and I decided to make a labor intensive breakfast I don't usually have the time or inclination to do. I opted for homemade waffles. (No mixes!). Turns out they aren't that hard to make and in the time I had before I was planning to wake them up, I made whipped cream and a strawberry syrup and waffles became a Waffle Bar.   I put out the traditional maple syrup, honey and softened butter as well as fresh blueberries.  It was fun to make each quarter of out waffles in to new and different combinations.   The strawberry syrup was a big hit. (Totally made it up and it was almost all fruit.)

In a medium bowl whisk together the flours, soda, baking powder, salt, and sugar. In another bowl beat together eggs and melted butter, and then add the buttermilk. Add the wet ingredients to the dry and stir until combined. Allow to rest for 5 minutes.

Ladle the recommended amount of waffle batter onto the iron according to the manufacturer's recommendations. Close iron top and cook until the waffle is golden on both sides and is easily removed from iron. Serve immediately or keep warm in a 200 degree F oven until ready to serve.

Purée ingredients in a blender and purée until smooth

Use electric beaters, bullet type blender, immersion blender etc to whip the cream and syrup together 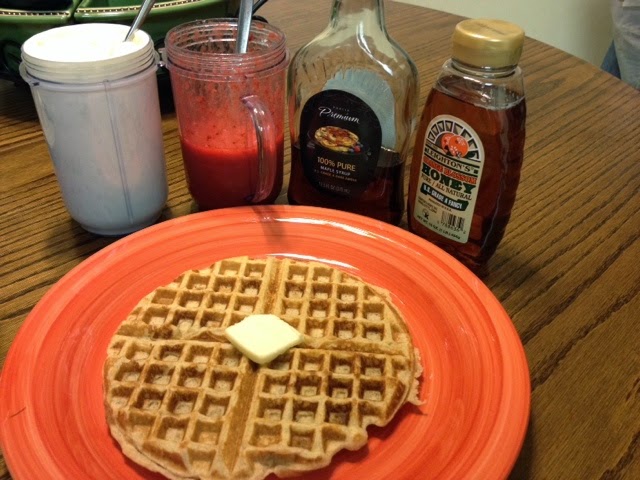 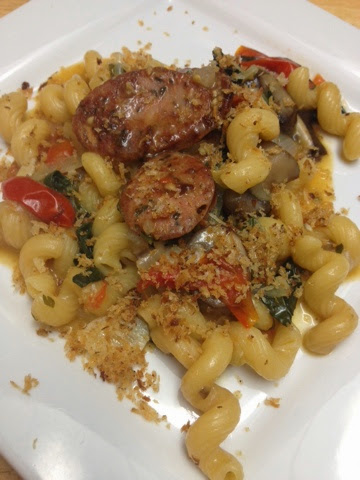 While we thought this was pretty good, (my husband went back for seconds) I don't think I'm keeping it in my files. We have so many amazing recipes and we just have become a little exclusive with what we keep. It's easy and fast so don't shy away from it on our account.

Eating Dinner With My Family